Artificial Intelligence (AI) technologies are playing an increasingly essential role among local municipalities in communicating about their services to residents. Chatbot services accessible via smartphone enable municipal governments to respond to residents’ inquiries regardless of the time of day. For local municipalities faced with a decrease in both population and financial resources, such chatbot services make it possible maintain as well as improve on the level of their resident services without adding burden to an already-strained workforce—a well needed solution across the nation.

The Mitsubishi Research Institute (MRI) conducted a trial of its own municipal chatbot service in September 2016 with the cooperation of the Kawasaki City and Kakegawa City governments. Residents appraised the trial, which featured information on child development support, for its ability to respond to inquiries 24 hours a day. From February to March 2018 the service’s content was expanded to include a wide range of categories from rules on refuse collection and pets to the issuance of official documents.
MRI’s municipal chatbot service requires no additional server preparation on part of participating municipalities thanks to its use of cloud computing. Also, both initial and running costs have been minimized through shared use of the system by multiple municipalities as well as the standardization of responses. As a result, widespread trials of the service have been well received with approximately 90% of residents and public servants displaying a desire for continued use (see diagram).

One factor behind the popularity of the service is the establishment of chat messaging as a primary means of communication among the younger public. Residents were particularly positive in their reviews of the service’s 24-hour convenience, accuracy of results surpassing typical search engines, and intuitive user interface. Public servants found the service convenient to use for themselves and remarked on the low costs through shared use—in the range of even the limited budgets of smaller municipalities.

MRI released its “Municipal Chatbot Service” for commercial use in October 2018. Leading up to release, MRI fine-tuned the service based on the results of multiple years’ worth of trials, increasing the database of predicted questions by 250% and weeding out typical “municipal jargon” from the responses. In order to fully capitalize on the influence of chat messaging, MRI plans on opening the service by April 2019 to use from within LINE, a popular messaging app among young audiences in Japan. Future plans for development of the service include increasing the accuracy and speed of responses through a larger pool of session data borne by the increase in users. 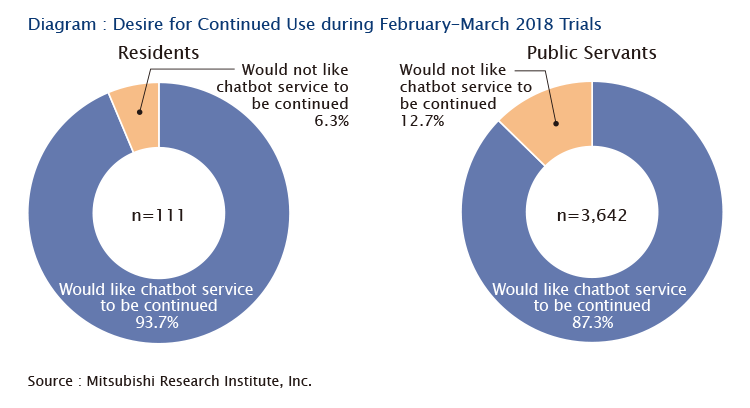