World Focuses on Potential of Braintech

Countries around the world, particularly the US, Europe, and Israel, are investing heavily in neuroscience research as part of their national strategies. One area where research and the development of commercial applications is particularly active is “braintech”–technologies that both read information from the brain, whether directly or indirectly, and effecting changes in the brain itself.

“Brain-machine interface” (BMI) is one example of braintech. BMI enables intent to be decoded from neural information, in turn allowing users to manipulate devices such as wheelchairs or prosthetic hands and creating a new communication interface as an alternative to keyboard or verbal input. Neurofeedback—a process in which the brain is mapped in real-time to enable it to be changed into a targeted state—is also attracting attention for its effectiveness in tackling depression, ADHD, dementia and other neurological conditions. The spread of these technologies would make it possible for individuals to control their own mental state and maximize their capabilities.

Braintech also enables the expansion of a human’s repertoire of functions. While aids such as robotic suits simply augment existing human functions like physical strength, research has shown that through braintech and proper training a human can learn to develop a new function like the control of a ‘third arm.’ This expansion of human functions has the potential to significantly boost the productivity of society and support the further participation of elderly and disabled people.

At CES 2019*1, braintech exhibitions related to sleep tech (technology that supports or enhances sleep) and controlling of mental and emotional states received a striking amount of attention. The number of sleep tech exhibitions saw a 20% increase compared to the previous year*2, testament to the growing profile of this field.
Nevertheless, the potential for widespread popularization of braintech is currently considered by some to be limited due to the difficulty in overcoming ethical concerns among consumers to the mapping and manipulating of the brain, the core of what makes us who we are. Governments must address these concerns by specifying clearly how data from the brain may be used and establishing ethical and safety codes. Furthermore, there are calls now for businesses operating in this space to prioritize user needs, rather than technological possibilities, in the development of commercial services. If collaboration across industries can be achieved, it may even become possible for humans to live comfortable, fulfilling lives of more than 100, 200, or even 300 years.

*1:A consumer electronics trade show that in recent years has been held every January in Las Vegas, USA. At CES 2018, the announcement by Nissan Motors of drive assist technology that uses brain reading showed that in addition to startups, major companies were also starting to show an interest in the technology.

*2:According to Living in Digital Times, material produced by CES 2019 for the media. 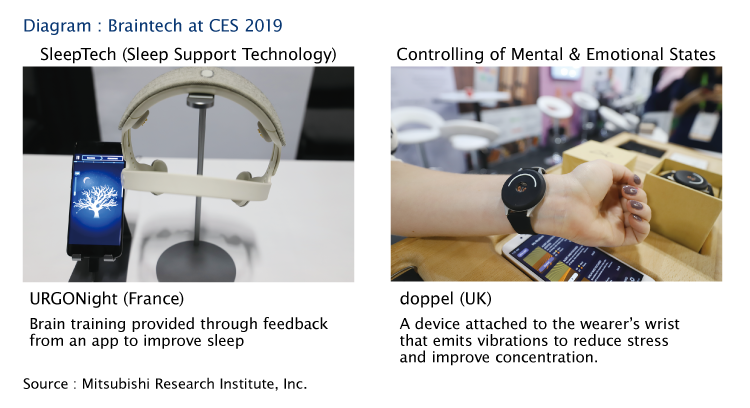