The fourth industrial revolution is underway due to innovative technologies such as artificial intelligence, robotics, and the internet of things. However, worries for the future are also abound such as sudden changes to society and progress in the replacement of human labor through automation and autonomous technologies. It is no surprise that the topic of well-being has been gaining attention on a global level.

In the Constitution of the World Health Organization health is described as "... a state of complete physical, mental and social well-being ...", and this has served as a wide definition of the term well-being since. This term has seen expanded usage in recent years to express the broad concepts such as the happiness and quality of life of humanity *1. As a part of the 50th Anniversary Research Project to envision the desirable future for humanity, we have identified the following five concepts as comprising well-being to be achieved by the future society [Diagram]: 1. Health, 2. Diversity & Connections, 3. Creating New Value & Self Actualization, 4. Safety & Peace of Mind, and 5. Sustainability for Future Generations.

Human enhancement technology and innovative medical technology will facilitate high degrees of health and quality of life. Telexistence technologies, which give the user a sense of presence over long distances, can be used in establishing new interpersonal connections. New value is expected to be created through research and development supported by artificial intelligence and as innovative technologies free us from simple and monotonous labor. Improvements to well-being through innovative technologies also comes with a host of issues: technological ethics, bioethics, concerns of social disparity, and equal use of technologies across future generations. Overcoming these issues is a pre-requisite for the desirable future society, as is proper management of these innovative technologies upon their introduction into society.

The Ars Electronica Festival is held every year in Linz, Austria's third largest city. The theme for the 2019 edition was "Out of the Box," and exhibitions included multiple examples of the unification of humanity and technology through art. Prominent examples included new music and visual expression created through collaboration between humans and artificial intelligence, and a visualization of the entirety of the social media network. The event offered a new glimpse of the realization of well-being in the future world, created by experts in the human, artists, and experts in technology, engineers. Through our research project, we aim to propose and work toward the realization of a future society in which diverse individuals work together to utilize innovative technologies in a wide variety of ways for the overall improvement of humanity's well-being.

*1:The OECD has released a framework for measuring well-being that has 3 domains and 15 key dimensions (e.g. work life balance, civil engagement). 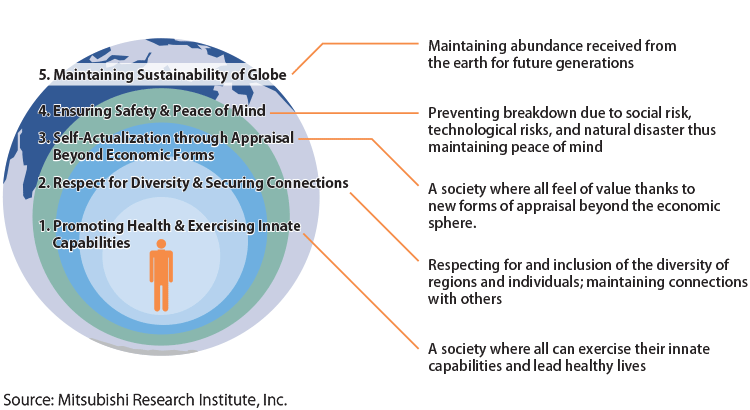