New Directions for Regional Revitalization in the Post-Corona Era

1. Weakness in Japan Revealed by the Coronavirus

The rapid spread of COVID-19 infections and the subsequent response have promoted “new normal” and an opportunity to transform Japan’s lifestyle, society, and economy. Such infectious diseases will never be fully eradicated, even in the future. We are expected to coexist with infectious diseases. The question is, then, how to manage our economy and society in the “post-corona” era.

The corona crisis has raised the latent risks inherent in the concentration of population in metropolitan areas such as Tokyo and Osaka, and regional revitalization that is reliant on inbound tourism. In terms of industry and the economy, supply shortfalls of medical masks and other necessities were highlighted and weaknesses in working styles at offices in large cities were brought into the open. Irrational behavior of some individuals such as repeated cases of emergency “hoarding” also became evident.

A lack of flexibility and agility in politics and administration has also been brought to the fore as conventional policies or methods could no longer address social or regional issues. The pursuit of efficiency has led to increased vulnerability in times of emergency. Japanese science and digital technology are among the most advanced in the world, however, the society and people’s lifestyles have not yet been able to cast off the habits of industrialized society.

Despite a call heralding an era of an active society of one hundred million people with a life expectancy of one hundred years, we have not yet reached the stage of visible social change. The present COVID-19 crisis has the potential for shifting from an industrialized society model that prioritizes wealth to a new model for the twenty-first century that aims at an affluent and sustainable society, beyond pandemic response.

Both government agencies and the private sector have struggled repeatedly to deal with unprecedented challenges in their responses to COVID-19. We have seen flexible responses from some local governments that have sought to find their own way, diverging from uniform response at the national level while some startup firms have introduced advanced technology and ICT to overcome weaknesses of the existing systems.

Wakayama Prefecture has forged its own path. Initially, at the national level, the criteria for PCR testing was narrowly defined and the number of tests overly limited. By contrast, under the prefectural leadership of Governor Yoshinobu Nisaka, PCR testing was proactively conducted, considering the actual situation such as local contact with foreign nationals and population movement between prefectures. Rather than relying on the uniform national standards, Wakayama Prefecture has consistently applied their own principle, based on scientific evidence, and identified and isolated infected persons by conducting active testing and contact tracing.

An important factor in Wakayama’s success is that they took the appropriate decisions and actions in accordance with the local situation such as local medical resources, the number of commuters coming from other prefectures, and the status of corporation with other prefectures to expand PCR testing. This was achieved by clarifying a division of labor within the prefectural office at an early stage and the Governor clearly explaining the measures to the residents and businesses.

Osaka Prefecture promptly called for the residents’ cooperation refrain traveling between prefectures as early as in mid-March. Then “Osaka Model” was introduced by early May 2020 which allowed the municipal government to request or release self-imposed movement restrictions based on the prefecture’s own standards. The neighboring prefectures of Kyoto, Hyogo, Shiga, Nara, and Wakayama also joined this endeavor, generating a move toward creation of a new code of conduct that better reflected the actual situation in each region. We have also seen many local governments showing autonomous initiatives, for example, on how to issue pandemic alerts and make them more accessible to the residents.

Preventing the breakdown of medical care provision is a paramount challenge in responding to the corona crisis. The key to this is, in addition to securing resources such as ICU beds and ventilators, to secure intensive care specialist physicians. During normal times, Japan had approximately 1,400 intensive care physicians, comprising only about 1 % of the country’s 146,000 hospital physicians. medical personnel shortages would cause a bottleneck particularly in pandemic.*1

In response to the present COVID-19 epidemic, T-ICU launched the “COVID-19 Project” (Figure) on April 15, 2020 to establish a system that would provide remote ICU capabilities for sever cases twenty-four hours a day. It increased the number of intensive care physicians for this project. Remote ICU will contribute to provision of high-quality intensive care by using ICT to overcome challenges of locations, facilities and time. T-ICU received acclaim from many local governments. Its new office on Port Island in Kobe has been supported by Kobe’s Startup Accelerator System and it has joined Japan’s leading medical cluster.

Meanwhile, EXAWIZARDS,*4 a firm whose strengths is AI-based image analysis, has begun collaborating with the city of Fukuoka to establish a helpline service for home-based caregivers, and provide an AI-based consultation application, which contains a various videos to be used for home-based nursing care and rehabilitation. It helps the elderly to maintain physical strength and cognitive function at home when external services are unavailable. This is an excellent example of collaboration between the local government and a startup firm to assist home-based caregivers who may become isolated when movements are restricted.
Figure: Collaboration Scheme Among T-ICU, Local Medical Institutions and Medical Personnel 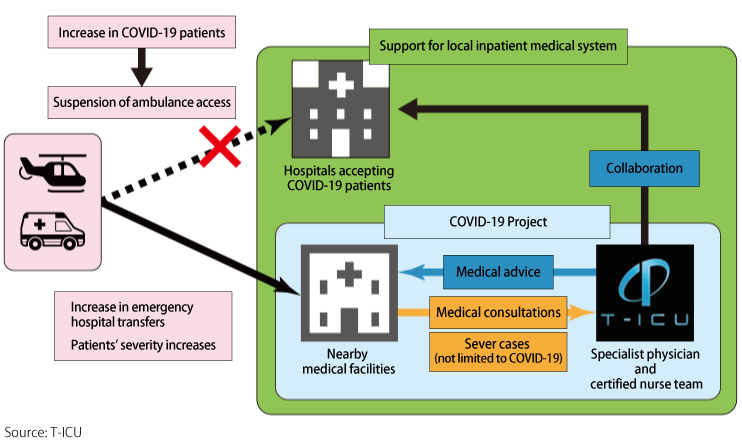 In the critical circumstances surrounding the outbreak of COVID-19, the signs of social change are apparent as the various experimental initiatives are being taken by local governments and firms. In addition to Wakayama and Osaka, other prefectures such as Hokkaido and Tokyo share the similar autonomous moves based on their local perspectives. In Kobe, efforts are underway to expand the co-creation of new industry and community projects at the earliest instance in anticipation of the post-corona era. These examples show a new form of regional revitalization, a society that reaps synergies among autonomy, decentralization, and cooperation.

“Autonomy” refers to overcoming the weaknesses of Japanese-style centralized control and governance that have become apparently in the COVID-19 outbreak. Local communities analyze their own situation and make their decisions without relying on uniform national standards. Inevitably, autonomy will also extend to local finances and development of local industry (including the transfer of financial resources from the central government).

“Decentralization” urges people to move around instead of residing only either in the countryside or in the city, and the community to actively accept people moving in from elsewhere in Japan or overseas. This will lead to rotations of human capitals who can contribute in multiple locations. For both inbound tourism and industry, it is important to make the communities more diverse and to further enhance the strengths of each region.

“Cooperation” refers to how a “decentralized” society that aims to solve community and social issues in various ways will form regional networks through cooperation with not only the local governments but also with the private sector (including startup firms with disruptive ability and unique technologies) as well as the local residents who are willing to change.

This will generate momentum for a transformation from the conventional hierarchical structure that positions Tokyo at its apex, to a decentralized cooperative network that endeavors to locally solve issues by making use of advanced technologies such as AI and IoT. Such cooperation requires strong, autonomous, decentralized regional communities. Mutual coordination and collaboration among strong regional communities will stimulate a variety of regional revitalization initiatives, including new industry, robust startup firms, and unique community activities in addition to crisis responses, as in the case of epidemic and other disasters.

The present corona crisis has suggested how to deal with historic junctures and difficult situations for which our past experiences have not been helpful. An autonomous decentralized cooperative society will be able to devise and implement more flexible, rapid, and effective solutions than a centralized hierarchical society. The pivot is not bestowed from the center (i.e., the state) but it requires actions on the part of its members (Table).

First, we need to reconsider the division of roles between the central and local governments. While the central government carries out organization and consolidation of holistic scientific knowledge, it should actively push for transfer of authority and financial resources to local governments depending on the area. This will enhance their autonomy. Digitalization and the evolution of advanced science and technology have lowered the costs necessary to locally solve regional issues and made it possible for local governments to deal with them.

Second, local governments, regardless of whether the population concerned is in rural or urban areas, need to engage necessary local actors in policy-making.*5 This will lead to “autonomous” decision-making and policy enforcement. These actors could be startup firms or universities or research institutes wishing to contribute to the society with their research results.

Third, companies should use the post-corona period as an opportunity to review and reconsider how they carry out their business including conventional centralization, working styles characterized by set office hours, solitary supply chains and other organizational management structures as well as the office locations. This exercise will revolutionize not only the sustainability of their business in times of emergency, but its efficiency in normal times as well.

Fourth, the residents should select their governors and councilors who can think about the future and strengths of the local communities, and judge and act independently. We have seen significant differences among governors in their attitude and actions toward the current COVID-19 situation. The residents should also enhance their sensitivity and literacy about local issues and not be afraid of change.

The autonomous decentralized cooperative society in the post-corona era is a major opportunity for Japan’s regional communities, and will be time for industry, government, academia, and citizens to work to create and co-create our future. We, MRI will utilize the Platinum Society Research Association and the Innovation Network for Co-creating the Future (INCF) (MRI acts as their secretariats), and continue to our active facilitation to create an autonomous decentralized cooperative society though initiatives such as the optimization of multiple policies for local communities, the implementation of regional pilot projects, and the expansion of partnerships among industry, governments, academia, and the private sector.
Table: Various Changes Before and After COVID-19 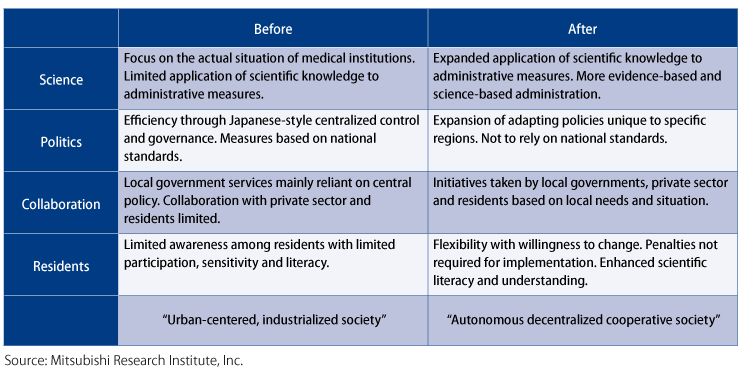 *1:The number of specialist intensive care physicians is based on data from the Japanese Society of Intensive Care Medicine, and the number of hospital-based physicians is drawn from the Ministry of Health, Labor and Welfare data published in “Statistical Overview of Physicians, Dentists and Pharmacists” (2018)

*3:In the U.S., the introduction of “remote ICU” began in the late 1990s, and 20% of ICU beds have been incorporated into the system. Research data has shown that the ICU mortality rate of critically ill patients has declined by 11.7%, and that the average length of patients’ ICU stays has decreased by 0.63 days.

*4:EXAWIZARDS is a startup firm aiming at industrial innovation and solution of social issues. Its service detects and predicts movements of products and people with a service that uses AI in image and video analysis.

*5:The concept of “reverse alternate attendance” (gyaku sankin-kotai ) ,which promotes work outside the major cities, proposed by the Platinum Society Research Association and MRI since 2017 would be an example of a potential measure to address many risks in advance of the “autonomous decentralized cooperative society”.