DX in Public and Financial Administration to Resolve Societal Issues

1. DX is the Key to Resolving Impending Societal Issues

With the aim of becoming the world’s most advanced digital nation, Japan has made an effort to use digital information and communications technology (ICT) to radically reform its societal systems, but the results so far have been unimpressive. Japan’s digital competitiveness has been weak. It comes in at 14th in the UN E-Government Survey issued in July 2020 by the United Nation’s Department of Economic and Social Affairs (UN DESA)1, and only 27th in the World Digital Competitiveness Ranking 2020 issued in September 2020 by the Institute for Management Development (IMD) of Switzerland2.

The countries that regularly top the UN e-government ranking see a high level of acceptance for public services provided through the Internet and mobile devices. For example, Denmark, coming in at number one in 2020, has over 90% of its population using Digital Post, a national service that enables citizens to receive correspondence digitally from public institutions and private companies such as banks and insurance companies. Australia too, number five in 2020, has over 90% of citizens registered for its public digital service My Health Record and the accompanying HealthNow mobile app; these services record and store data such as medical records, test results, and prescriptions enabling access to health information for both individuals and their healthcare providers.3

In contrast to this, Japan has only recently achieved a 30% rate of use for its Individual Number Card as of May 2021. Although many public institutions have switched over to electronic application processes, this move has largely been limited to measures such as digitally re-creating paper forms; users are still far from enjoying the ease-of-use and convenience of digital processes.

The world is undergoing radical change making the future ever-more difficult to forecast. Given these circumstances, it is particularly urgent for public administration, which deals with an overwhelmingly higher number of service recipients than the private sector, and financial administration, which is subject to complex regulations and compelled to operate in a global environment, to deliver services in ways that enable rapid adaptation to future changes in social environments and systems, and that provide a high degree of satisfaction to users.

Creating new services by making good use of systems that are already established and linking them together might seem an easy approach, but this approach often goes much less smoothly than expected. Digital transformation (DX) is the key to overcoming the fundamental issues that impede radical reform. DX should be fostered through three main steps, always guided by the goal of creating services based on the needs of users.

The private sector must address DX in its own set of measures.

2. Recent Barriers to DX in Public and Financial Administration

Services offered by the private sector have arisen alongside revolutionary technological progress and widespread use of the Internet and mobile devices; these services feature advanced functions such as recommendation capabilities, AI chatbots, e-money, voice recognition, and speech synthesis.

Users naturally expect the same or even better functionality from public services. In fact, some countries have been able to deliver public services that incorporate the same advanced technologies and devices as those in the private sector. Japan’s public sector, however, has not done enough to provide such new services, leading to considerable dissatisfaction among users—both citizens and businesses. Three institutional issues lay at the heart of this problem:


To overcome these issues, all necessary information must be digitized and a digital environment created that enables the manipulation of this data entirely within its confines. By gathering useful data from multiple sources into one system platform, users will find it much easier to discover the best way to process their work—the result, large savings on time and effort for coordination.

The Japanese national government has started some major initiatives to promote digital technology; it revised the country’s primary law on IT* and will establish the new Digital Agency, an organization with a comprehensive coordination function spanning ministries and agencies, in September 2021. The agency’s website states its intent to resolve the three institutional issues above and displays a variety of content on topics such as: one-stop services using smartphones, utilizing data resources, and working in the digital realm. Hopes are high for both better efficiency in government operations and new services that are more convenient for citizens and businesses.

The financial administration field is searching for ways to use digital technologies to alleviate the burden of adhering to regulations. In particular, the Financial Services Agency and the Bank of Japan have begun examining the idea of constructing a Joint Data Platform (tentative name) in response to a Liberal Democratic Party proposal made in October 2020 to reduce the burden on financial institutions related to regulatory compliance.

The time has finally come to promote digitalization throughout the whole of society, to create services based on user needs.

3. Steps for Achieving a Digital Society

A digital society would be characterized by the sole use of the digital environment for work operations and processes. However, despite growing momentum for wider use of digital technology, much remains to be done before a digital society can be achieved. Digital means should be applied in an increasing, staged approach in order to maintain operational and system stability while simultaneously tailoring services to user needs. (Figure 1)
Figure 1: Three Steps for DX in Public and Financial Administration 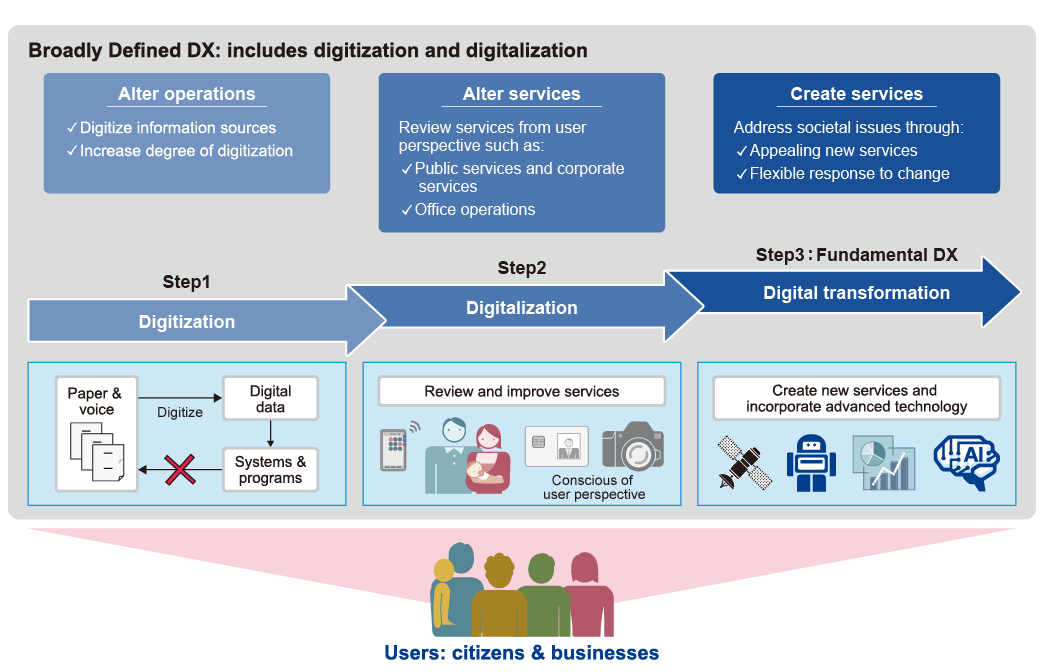 Digitization starts with identifying operations that remain in or are reverted back to analog forms. If paper-based applications are unavoidable, a solution must be devised that allows for the quick and accurate digitization of the data on the application. Forms and operational procedures must be overhauled to allow for seamless on-screen confirmation—essential to prevent information from returning to analogue formats once already digitized. These efforts will result in the digitization of all work-related information and thereby free the workforce from constraints of time and place.

Organizations must go beyond simply digitizing their data; they must reform their current services to ensure greater user convenience and operational efficiency. Digitalization involves reviewing existing programs and operations, redesigning their systems using service-design thinking, and launching the new services.

Digitalization creates services that are of greater usefulness. The process for submitting an application to the local government offers one prime example for digitalization. The reform would start with finding and gathering into one place the data used in the reporting of and the algorithms for approving an application. The next step would be to create a mechanism that enables easy access to and transfer of necessary information. Subsequent review would resituate procedures and programs to meet user needs, making full use of digital technologies typical of the private sector including video distribution, voice recognition, and location information display.

Fundamental DX is the process of designing new services based on user needs, carrying out their construction with speed and simplicity, and ultimately delivering them to their intended audiences. DX is often framed to encompass the Step 1: Digitization and Step 2: Digitalization processes, but Step 3 refers to DX in its most refined form.
The methods used in Fundamental DX reflect those of the digitalization process in Step 2 except that they are used to create totally new services. The ideal would be to create systems that enable users to experience a completely unprecedented level of convenience by utilizing technologies such as AI, robots, and big data. For Fundamental DX, speed is of the utmost importance rendering moot lackadaisical initiatives that plan for two to three years before completion. In the face of genuine demand, one year is the limit for time until launch.

4. Important Considerations When Setting Out on DX

Individual journeys toward DX have the freedom to move on to subsequent steps before fully completing the previous ones; the important thing is to create a common system that allows for information stored in separate existing systems to be manipulated—spanning all the data to be handled within the organization and all the content to be processed via operations. This common system will enable rapid assembly of the necessary elements for and system redesign of existing technology when a new service is required.

Furthermore, the ultimate objective is to deliver new services based on user needs, and drafting up a DX vision, including goals, desired effects, and ideas for the DX process, is a precursor to a successful transformation. A DX vision will shed light on the required human resources and ICT infrastructure as well as the limitations and other factors that could obstruct the way.

DX must be planned over the medium-term, and policy trends should be monitored for those that could significantly impact organizations and the services they provide—perhaps the use of Individual Number Cards and access to a basic registry on public information. An organization must continually reflect on DX vision and follow through with updates as necessary. DX momentum is based on sufficient human resources and their proper education and training.

The Mitsubishi Research Institute works to achieve a digital society that makes full use of digital technology to offer services based on the needs of citizens.