Restrictions on our daily life have begun to be eased after a state of emergency in the Tokyo metropolitan area was lifted. It has become evident from the cases in other countries that relaxing vigilance could pose a risk of the second and third waves of infections. Japan has so far had a small number of deaths (at the time of writing), with a cumulative total of 5.9 deaths per one million persons, which is far less than some other countries (Table). It has not yet been clear why it has been the case even though there have been a lot of debates. There is little prospect of an effective vaccine being developed any time soon, therefore, we need to continue a trial-and-error approach without relaxing vigilance as we explore effective but less burdensome ways to control a spread of this virus.

It is necessary to consider the significant difference between the number of people infected with COVID-19 and the number of people who show severe symptoms (this is a major difference from the cases of SARS in 2003). It should be noted that the speed of increase in severity seems quite high once their symptoms start to deteriorate. Also, those who have been infected without any symptoms (asymptomatic carriers) can still transmit the virus to other people around them. In other words, it is a matter of urgency to identify asymptomatic carriers and take necessary measures such as isolating them for a set period of time can prevent a spread of the virus and minimize severe cases and deaths.

Additional measures such as antigen tests and antibody tests have been discussed, so as an urgent need to increase the number of PCR tests, which has already been happening, and to shorten the time required to provide them and those results, yet, nothing seems to be decisive. We also need to assume that there are large numbers of asymptomatic carriers. There is no other way of preventing a sharp increase of severe cases but to continue controls as a protective measure until an effective vaccine will be developed.
Table: Number of Confirmed COVID-19 Cases and Deaths by Country (As of May 17, 2020) 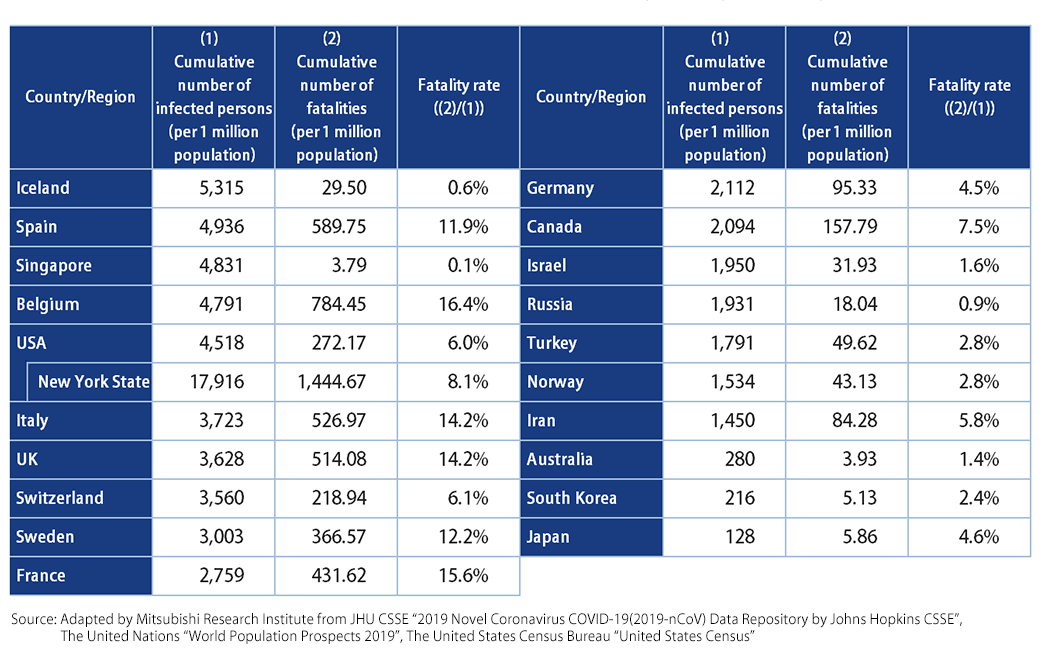 Even though a state of emergency has been lifted, it will be more effective to shift from blanket restrictions to more targeted restrictions focusing on specific individuals, locations, and contact patterns if we are to minimize negative impacts on economic and social activities and maintain vigilance to prevent a further spread of coronavirus. People tend to feel sympathy and fairness when objective explanation will be presented based on ICT and big data.

For example, in Singapore and South Korea, smartphone contact tracing applications have been introduced, making it possible to identify, on the mobile devices, the individuals who might have come close to or contacted with infected persons. Japan is considering introduction of a user notification system on the smartphones where the users will be notified of possible contact with infected persons. The users will be able to consult public health centers at an early stage. It may be an effective way to control infections as the system can also track sporadic outbreaks.

It will be possible to identify high risk areas or buildings and restrict people’s movement if, in conjunction with such a smartphone application, we make use of people-flow data that can analyze population movement between regions. We will be able to identify locations where the risk of infection may be higher based on information on the movement history of the infected persons, building occupancy data, estimated length of stay and characteristics of those locations. Also, we can determine a need for limited movement restrictions by analyzing the population flows and the characteristics of the areas that are experiencing an increase in infections.

3. Need to prepare for an upsurge of new cases

Another important point among these protection measures is to provide severe cases with appropriate treatment and to be prepared for such a situation. In the countries which have been experiencing large numbers of deaths, including Europe and the United States, there are many cases where failure to cope with an upsurge in severe cases have caused medical systems to collapse, resulting in more deaths in a short period of time. On the other hand, there are other countries whose numbers of fatalities per capita have been kept below a certain threshold. These countries were better prepared for a possible upsurge of severe cases. To take an example of Germany, not only have the country’s medical care systems including securing adequate numbers of ICU beds been well-developed, but also the Federal Government has introduced a centralized system where it managed ICUs and allocated medical resources depending on the situation as an emergency measure. Furthermore, additional measures have been taken to ensure the capacity to treat severe cases by limiting the number of less-urgent surgeries.

In Japan, where the number of ICU beds per capita is comparatively small, there has been an urgent need to secure them and to ramp up ventilator production. This kind of equipment can only function if there are medical personnel who can operate it. It is, therefore, important to train medical personnel and redistribute appropriate workforce based on the number of severe cases as a precaution measure. There is room for improvement in putting in place a national emergency response system like that of Germany. Had municipalities shared information on available hospital beds and assigned them to severe cases among them, it would have alleviated the situation during the first wave of pandemic. Currently the Japanese Government is taking a lead in developing hospital bed monitoring system. Municipalities can utilize this system to cooperate to accommodate severe cases in hospitals.

Another major lesson learnt from Japan’s initial experience was the need to categorize the intensity of pressure on the medical care system due to an upsurge of infections into different levels, and then for each stage, to decide on courses of treatment and criteria for placing patients to appropriate medical institutions (including provisional isolation facilities such as hotels). Without clarifying divisions of roles and procedures to handle this kind of situation, ensuring the understanding of citizens and medical institutions in advance, it will be difficult for medical personnel on the ground to take prompt actions. This may lead to a possible situation where lives that can be saved may be lost. We must avoid such a catastrophic situation and overwhelming the Japanese medical care system.

4. Marshal wisdom to survive this long-term battle and build a post COVID-19 society

Germany and Singapore once managed to flatten the curve but started to see another rise in new cases upon lifting of the lockdowns (Figure). A simulation was carried out to estimate how long it would take to contain a spread of the coronavirus (assuming that the number of new cases would decrease to one in ten) in several European countries and it revealed that it would take three to four months with strict restrictions (lockdowns). It will take longer, perhaps as long as some years, if restrictions are fully relaxed. We will have to prepare for a long-term battle.

The key to contain the coronavirus is no doubt a development of a vaccine. We must therefore work together globally to realize this. At the same time, we need to identify the factors and mechanism that cause escalation of severity by examining the characteristics of the coronavirus. If we can predict the cases that are likely to worsen at an early stage, we can provide them with more appropriate treatment and avoid fatalities. By analyzing those cases, we may be able to avoid lockdowns that negatively affect our society and the economy. We should allocate more resources to thoroughly study the etiology of severe cases of COVID-19.

Japan has so far seen a relatively small number of deaths in comparison with some European countries and the United States and managed to curb the spread of the coronavirus without enforced lockdowns. If we can pinpoint the underlining factors, we may be able to find new effective ways to control infections, which should be thoroughly analyzed not only from the medial point of view but also from sociological, economic, and big data perspective.

COVID-19 may be a rare disease that will occur only once in a century but we will never go back to the pre-Corona society or economy. The post-Corona life and economy may solve some of longstanding challenges all at once. Working from home for an extended period of time prompted regulatory reforms and advancement of digital transformation (DX) more than ever. We could make the best out of the current situation to accelerate social and economic reforms.

Examination of government policies of other countries using the SEIR model

Using the SEIR (Susceptible-Exposed-Infectious-Recovered) model, a typical mathematical model for infectious disease, we examined the number of COVID-19 cases in the selected countries and the impacts of the countermeasures. The results showed that it took about ten days for restriction measures such as lockdowns to result in a decrease in new cases. These countries saw, however, another increase in new cases after curving the spread of coronavirus for a while once they had relaxed restrictions. A case in point includes Germany and Singapore once managed to control the virus. We will need to further investigate the impacts of lifting lockdowns as we observe the infection figures and adjust various restrictions.
Figure: The number of confirmed COVID-19 cases and regulatory measures in Germany (～ 5/10) 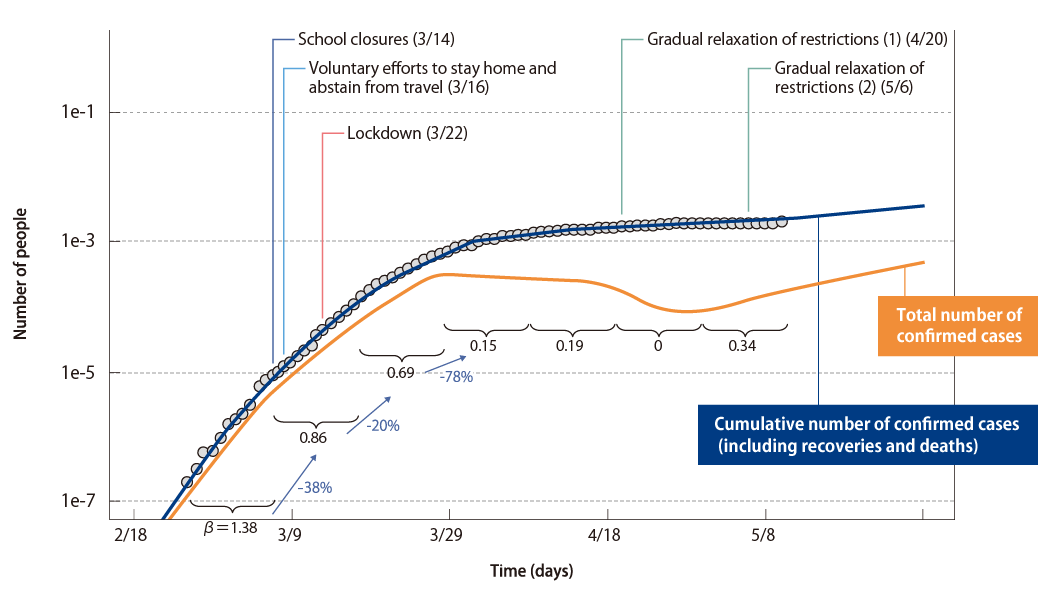 Figure: The number of confirmed COVID-19 cases and regulatory measures in Singapore (～5/10) 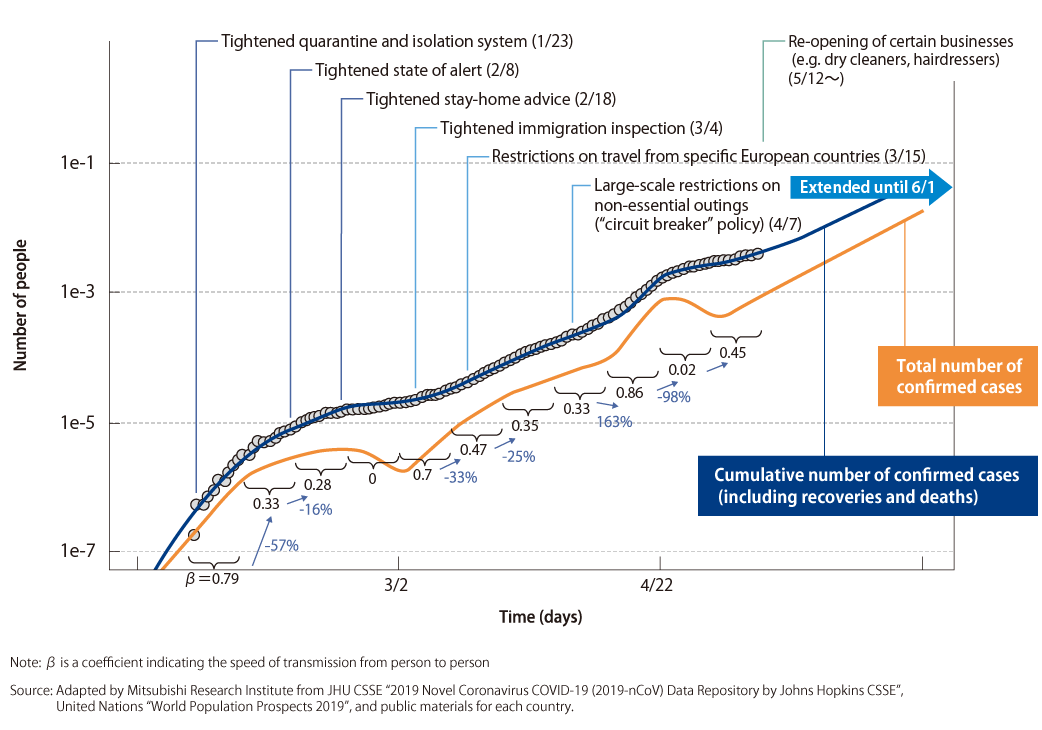 See the link below for more detail (in Japanese):